In this code, a function named createGreeting is defined which returns an anonymous function.  When the anonymous function is executed, it prints a greeting which consists of the outer function’s greeting parameter along with the inner function’s name parameter.  While the greeting parameter is neither a formal parameter  nor a local variable of the inner function (which is to say it is a free variable), it is still resolved when the function executes.  Moreover, the createGreeting function object is no longer in scope and may have even been garbage collected at the point the function executes.  How then does this work?

Conceptually, we can think of our closure as the marriage between a function and the environment in which it was declared within:

Exactly what this marriage looks like at an implementation level differs depending on the language.  In C# for instance, closures are implemented by the instantiation of a compiler-generated class which encapsulates a delegate and the variables referenced by the delegate from its declaring scope. In JavaScript, the function object itself contains a non-accessible property pointing to an object containing the variables from its declaring scope.  While each implementation differs, both render a function that has access to what its environment looked like at the point it was created.

Let’s move on to examining how JavaScript closures work from a specification perspective.

To understand how closures work in JavaScript, it helps to have a grasp of the underlying concepts set forth within the ECMAScript Language Specification.  I’ll be using Edition 5.1 (ECMA-262) of the specification as the basis for the following discussion.

There are three primary components prescribed for the Execution Context:

Only the LexicalEnvironment and VariableEnvironment components are relevant to the topic of closures, so I’ll exclude discussion of the ThisBinding.  (For information about how the ThisBinding is used, see sections 10.4.1.1, 10.4.2, and 10.4.3 of the ECMAScript Lanauage Specification.) 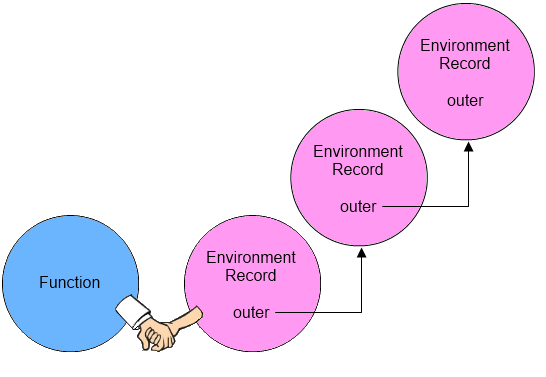 A Distinction Without a Difference … Usually

The with statement facilitates block scope by using a supplied object as the Environment Record for a newly created LexicalEnvironment.  Consider the following example:

This concludes our exploration of closures in JavaScript.  While understanding the ECMAScript Language Specification in detail certainly isn’t necessary to have a working knowledge of closures, I find taking a peek under the covers now and again helps to broaden one’s understanding about a language and its concepts.